Ambassador of the Republic of Korea visited IIASA

Shin Dong-ik, Ambassador to Austria and Permanent Representative of the Republic of Korea to the United Nations in Vienna, visited IIASA on 15 March 2019.

During his visit, Shin Dong-ik met with IIASA Director General and Chief Executive Officer, Albert van Jaarsveld and with the IIASA External Relations Department, to learn more about the IIASA research agenda and the institute's current and future research collaborations with Korea.

Korea joined IIASA in 2008 and since then a range of research collaboration and capacity building activities have been developed by IIASA and it's 18 Korean research partners. Studies have explored green growth in Korea, global water challenges, and how to increase Korea’s resilience to extreme events.

Since joining the Ministry of Foreign Affairs in 1981, Ambassador Shin has dedicated his career to multilateral and global affairs. From 2013 to 2016 he served as Deputy Minister for Multilateral and Global Affairs. Prior to this assignment he was Ambassador and Deputy Permanent Representative at the Korean Mission to the United Nations in New York (2011–2013), where he had worked as Minister-Counsellor from 2005 to 2008. He further served as the Director-General for International Organizations at the Ministry of Foreign Affairs (2008–2010). 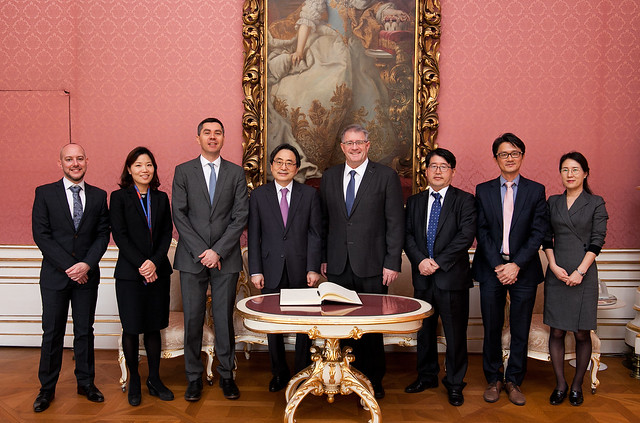 IIASA and the Republic of Korea

Since the Republic of Korea’s (Korea) membership of IIASA began in 2008, a range of research collaborations and capacity building activities have been developed by IIASA and 18 Korean research partners. Studies have explored green growth in Korea, global water challenges, and how to increase Korea’s resilience to extreme events among a range of other topics. Most of the research has also advanced Korean capacity to use and develop the tools of systems analysis such as building a Korean version of the IIASA GAINS model that has helped governments across the globe to cut air pollution and greenhouse gas emissions in the most cost-effective manner.

In addition, fourteen young Korean scientists have gained international and interdisciplinary research skills after winning places in IIASA programs for young scientists. These activities are complemented by significant scientific exchange with researchers either visiting Korea from IIASA or visiting IIASA from Korea over 180 times