OECD Secretary-General Angel Gurira led a high-level OECD delegation to visit IIASA, the Secretary-General gave a special lecture titled "Better Policies to meet the Systemic Challenges of the 21st Century" at the Austrian Federal Ministry of Education, Science and Research, which was followed by the signing of a new OECD-IIASA Memorandum of Understanding.

The OECD and IIASA have a strong history of mutual collaboration and strategic partnership highlighted by the recent formation of the OECD-IIASA Task Force on Systems Thinking, Anticipation and Resilience. The taskforce is committed to combining the policy and action expertise of the OECD with the scientific and analytical excellence of IIASA to jointly shape and develop innovative policies by applying systems thinking to the critical global issues facing humanity.

During his visit, OECD Secretary-General Angel Gurría was joined by a high-level OECD delegation and met with IIASA senior management and researchers to examine conclusions from a recent first meeting of the OECD-IIASA taskforce in Paris.

Following delivery of a special lecture "Better Policies to meet the Systemic Challenges of the 21st Century", the OECD Secretary-General signed a ceremonial Memorandum of Understanding with IIASA Director General and CEO Professor Dr. Pavel Kabat at the Austrian Federal Ministry of Education, Science and Research in the presence of H.E. Federal Science Minister Heinz Fassmann. 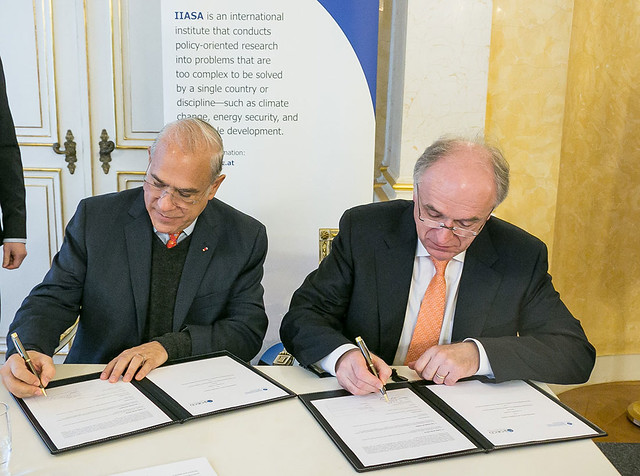 Better Policies to meet the Systemic Challenges of the 21st Century

On March 6th, Secretary-General Gurría gave a special lecture titled "Better Policies to meet the (Systemic) Challenges of the 21st Century" at Austrian Federal Ministry of Education, Science and Research. In his lecture, the Secretary-General underlined the need to tighten the links between science and analysis on the one hand with policy and action on the other to better address global challenges. He showed how policy-makers in every field are confronted by complex and connected systemic issues and rising levels of risk and uncertainty. He described how the development of systems approaches can provide a sound basis for coherent economic, social and environmental action to provide safer and better lives for citizens today and for future generations. He stressed that, to solve today’s complex and interconnected challenges, we need to depart from conventional thinking and will outline the sustained efforts being undertaken by OECD to generate new approaches to the critical global challenges which are faced by both industrialised and developing countries at this time of fundamental change in an increasingly complex and interdependent world.

Angel Gurría Born on May 8th, 1950, in Tampico, Mexico, Mr. Gurría came to the OECD following a distinguished career in public service in his country, including positions as Minister of Foreign Affairs and Minister of Finance and Public Credit in the 1990s. For the first time in a generation, he steered Mexico’s economy through a change of Administration without a recurrence of the financial crises that had previously dogged such changes. As Secretary-General of the Organisation of Economic Co-operation and Development (OECD) since 2006, Angel Gurría has firmly established the Organisation as a pillar of the global economic governance architecture including the G7, G20 and APEC, and a reference point in the design and implementation of better policies for better lives. He has broadened OECD’s membership with the accession of Chile, Estonia, Israel, Latvia and Slovenia, and has made the Organisation more inclusive by strengthening its links with key emerging economies. Under his watch, the OECD is leading the effort to reform the international tax system, and to improve governance frameworks in anti-corruption and other fields. He has also heralded a new growth narrative that promotes the well-being of people, including women, gender and youth, and has scaled up the OECD contribution to the global agenda, including the Paris Agreement on Climate Change and the adoption of the Sustainable Development Goals.

The Organization for European Economic Cooperation (OEEC) was established in 1948 to run the US-financed Marshall Plan for reconstruction of a continent ravaged by war. By making individual governments recognize the interdependence of their economies, it paved the way for a new era of cooperation that was to change the face of Europe. Encouraged by its success and the prospect of carrying its work forward on a global stage, Canada and the US joined OEEC members in signing the new OECD Convention on 14 December 1960. The Organisation for Economic Co-operation and Development (OECD) was officially born on 30 September 1961, when the Convention entered into force.

Organisation for Economic Co-operation and Development

The full lecture is available to read.

The Organisation for Economic Co-operation and Development (OECD)