A visit to Mexico by an IIASA delegation led by the institute’s Director General and CEO Professor Dr. Pavel Kabat, has opened doors to expanded collaborations with Mexican scientists and policy makers. A newly launched CONACYT-IIASA program will bring 5 Mexican Postdoctoral Fellows to IIASA each year.

The IIASA delegation met with the Director of CONACYT Dr. Enrique Cabrero, President of INEGI Eduardo Sojo and Mario Molina, a Nobel Prize winner for chemistry and a long-term IIASA collaborator. The visit included workshops in Aguascalientes with INEGI and CONACYT researchers, to explore opportunities for collaboration in areas related to water, demography, natural hazards risk, and land use. In Mexico City, the IIASA delegation met with representatives of Mexico’s academic and policy communities, developing a framework for building research cooperation. 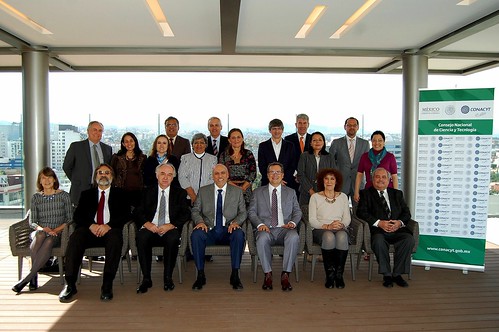 A reception at the Austrian Embassy, hosted by Ambassador Eva Hager, included high-level representatives of the scientific and science policy community in Mexico, NMO representatives, key IIASA alumni and collaborators, and representatives of the embassies of other NMO countries. At the reception, Kabat and Cabrero signed an agreement between CONACYT and IIASA which will fund up to five Mexican scholars a year to come to IIASA.

As part of the celebration of CONACYT's 45th anniversary, Kabat offered a keynote speech, the first public lectures to be given at the new CONACYT auditorium.

The visit included a series of workshops in Aguascalientes, where INEGI is centered, and in Mexico City, at CONACYT’s headquarters. The presentations at these meetings provided the foundation for the development of a framework for collaboration between IIASA and the Mexican science and policy community. INEGI researchers offered presentations on their Digital Map of Mexico, a data-rich, spatially explicit map incorporating economic and census data, their Rio San Pedro Basin model which aims to develop scenarios of water use in the Basin, and a suite of Demographic projects based on their Demodin model. IIASA Director General Pavel Kabat presented an overview of the Mexico-IIASA  cooperation, and former Mexican Research Scholar Luis Javier Castro offered a summary of the early demographic research on migration, which began a collaboration in population research that continues today. Reinhard Mechler, Deputy Director of the Risk, Poverty, and Vulnerability Program, and Florian Kraxner, Deputy Director of the Ecosystem Services and Management Program, offered overviews of areas of collaboration and possible cooperation in research on risk mitigation and integrated modeling. Deputy Director General Nebojsa Nakicenovic gave an overview of Energy challenges and options for cooperation, and Capacity Development and Training Program Director Maggie Goud Collins described opportunities for training.

Kabat gave a keynote speech at CONACYT on 4 November, preceded by introductory remarks by Enrique Cabrero.

INFOSHEET ON IIASA ACTIVITIES WITH MEXICO

Blog: Towards old-age pensions for everyone in Mexico

Demographyc Model of the Dynamics of Mexico

Postdocs and Partnerships: Opportunities for Capacity Development Cooperation with IIASA