At a ceremony on 25 June at the Austrian Academy of Sciences in Vienna, Kabat received the Austrian Cross of Honor for Science and Art, First Class (Österreichisches Ehrenkreuz für Wissenschaft und Kunst I. Klasse) from Jakob Calice, Secretary General of the Federal Ministry of Education, Science and Research. The award is conferred by the Federal President of the Republic of Austria and recognizes leading figures who have “gained universal recognition and a distinguished reputation for their outstanding achievements in the field of science or art". It may be given to Austrians or those from overseas.

“It has been my privilege to lead IIASA and the fantastic work carried out by its researchers for the past six years, and I am honored to receive this distinction,” said Kabat.

Kabat, a mathematician and hydrologist with a 30-year research career, took up his role as the 10th IIASA Director General and CEO in February 2012. As well as overseeing the work of almost 400 international staff, a global research network of around 2,500 scholars and over 600 partner institutions, Kabat is a full professor of earth system science at Wageningen University in the Netherlands. He is the founding chair and director of the Royal Dutch Academy of Sciences and Arts Institute for Integrated Research on the Wadden Sea Region (known as the Wadden Academy) and a member of the Leadership Council for the UN Sustainable Development Solutions Network.

The Austrian Cross of Honor is Kabat’s second national honor. In 2013, he was made a Knight with the Order of the Netherlands Lion by Her Majesty Queen Beatrix. The order was founded in 1815 and recognizes excellence in the arts, science, sport and literature.

Kabat will take up his new position as the first Chief Scientist and Research Director of the World Meteorological Organization (WMO) later this year. His appointment was announced in March. He will lead the WMO’s strategic direction and its main research activities, including the World Climate Research Programme, the World Weather Research Programme and WMO’s Global Atmosphere Watch. 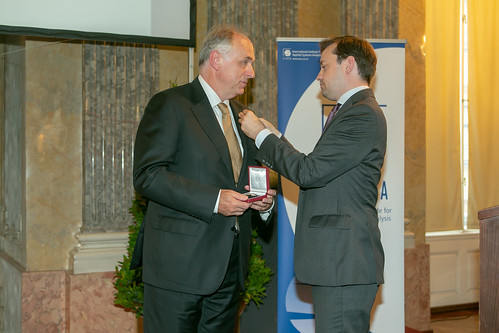