Recommendations from the Alpbach-Laxenburg Group (ALG) identify the key issues—challenges and barriers, outcomes and next steps—to support the effective implementation of the Sustainable Development Goals (SDGs).

Members of the ALG—a reflection group of world leaders across the main sectors of global society, including government, business, science, civil society, and the arts—presented their conclusions today at a public plenary session of the 2015 European Forum Alpbach, following a two-day high-level retreat during the Political Symposium of the Forum.

The focus of the retreat was on the SDGs, due to be adopted later this year, and specifically on meeting the challenges involved in making the transformation to sustainability a reality.

Now in its third year, the Alpbach-Laxenburg Group (ALG), at its 2015 retreat, devoted its expertise to examining the Sustainable Development Goals (SDGs) and, specifically, to meeting the challenges involved in making the transformation to sustainability a reality.

The group discussed topics that they felt need to be addressed for successful implementation of the goals, and prepared concrete outcomes and recommendations in order to assist in this. These included the need for effective communication, to create a sense of ownership and a call to action, and the need for multi-stakeholder partnerships for implementation of the goals, negotiations, and governance. They also concluded that the SDGs should be viewed holistically—using systems analysis to ensure an integrated approach across all goals and individual indicators. Finally, they recognized a need to address the goals in the context of current geopolitical complexities (e.g., migration).

IIASA Director General and CEO Professor Dr Pavel Kabat said, “We had a fruitful two days of discussions, bringing together representatives from all sectors of society as part of the Alpbach-Laxenburg Group. There has been a great deal of work on forming the SDGs which has led us to where we are today, but now there is still much to be done to ensure they are implemented successfully to enable a sustainable future for all.”

In 2013, IIASA and the European Forum Alpbach jointly launched the ALG, and the first retreat was held in August 2014 during the European Forum Alpbach Political Symposium. Following this, the group announced their intention to bring together a systems analytic perspective, based on the rigorous science carried out by IIASA and its global network, and including world leaders across all sectors of society, to support global diplomacy in achieving sustainable agreements and policies for the world’s future. 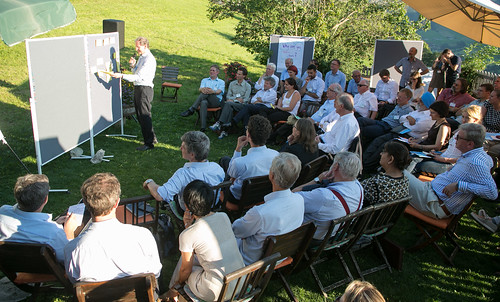 During the retreat participants of the group presented some of the initial conclusions to H.E Federal President Heinz Fisher, and held discussions with Andrä Rupprechter, Austrian Federal Minister of Agriculture, Forestry, Environment and Water Management, with Amina J.Mohammed, Special Advisor of the Secretary-General of Post-2015 Development Planning, and Carole Dieschbourg, Minster for the Environment. A full list of participants is available online.

Launch of The World in 2050 project