IIASA Director General and CEO, Professor Dr. Pavel Kabat, made an official visit to the People’s Republic of China from 2-7 July 2017 to participate in the international symposium "Funding Science and People Cooperation for a Prosperous Belt and Road" which was organized by IIASA National Member Organization the National Natural Science Foundation of China (NSFC).

Kabat gave a keynote speech about the multinational scientific collaborations that IIASA is spearheading along the Silk Road Economic Belt and the 21st Century Maritime Silk Road.

During the visit Kabat also attended a number of bilateral meetings in both Beijing and Shanghai with key members of Chinese academia to discuss enhancing collaborations with Chinese research partners.

About the Symposium: Funding Science and People Cooperation for a Prosperous Belt and Road

In 2013 Chinese President Xi Jinping unveiled the initiative of jointly re-establishing the Silk Road Economic Belt and a 21st-Century Maritime Silk Road, in an effort to address the various challenges faced by human economic and social development, and to promote world peace and prosperity.

This initiative has since received close attention from the international community, and enthusiastic responses from the countries along the belt and road. Science and technology is an important driving force for the belt and road initiative, and innovation is the indispensable means through which the initiative’s various challenges can be met.

On this basis the NSFC organized the international symposium "Funding Science and People Cooperation for a Prosperous Belt and Road" with the aim to announce and endorse a joint declaration on the belt and road funding framework for science and people collaboration.

Participants included heads of science funding agencies and international scientific organizations, directors of international cooperation or policy studies affiliated to these institutions, and other key science and technology leadership figures.

During his time in Beijing and Shanghai, Kabat also met with some key members of Chinese academia to discuss enhancing IIASA-China collaborations, including:

During the symposium Kabat met with Vladislav Panchenko, President and Board Chairman of the Russian Foundation for Basic Research (RFBR), and in Shanghai he met with Vladimir Kazbekov, Vice President, Chief Administrative Officer of the New Development Bank to discuss the IIASA Future Initiative Challenges and Opportunities of Economic Integration within a Wider European and Eurasian Space. 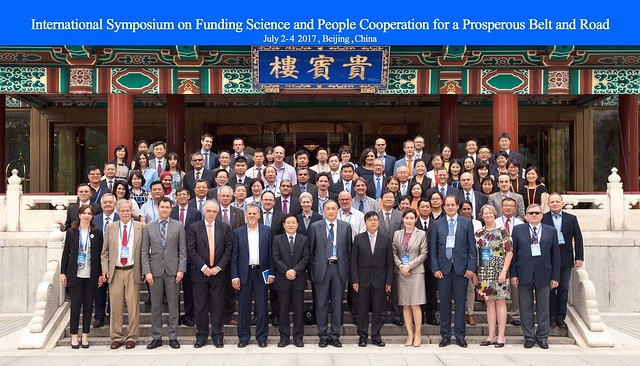 Research collaborations between IIASA and the People’s Republic of China have been highly productive since China became a national member of IIASA in 2002 through the National Natural Science Foundation of China (NSFC). Multiple research collaborations with partners ranging from universities to institutions of the Chinese Academy of Sciences to governmental bodies have brought new insights to the challenges that China faces. In particular, IIASA applied systems analysis has brought a global perspective and interdisciplinary research expertise to Chinese agricultural policy, demography, energy scenarios, air pollution, and risk mitigation among others.

Greater collaboration with IIASA has also contributed to China’s research base through enhancing modeling knowledge and skills. And joint projects have brought Chinese researchers into contact with the Institute’s global network of around 3,500 scholars and 700 research partners. These formal and informal connections, including projects initiated by IIASA and NSFC, have resulted in almost 250 joint publications since 2010. IIASA’s academic training programs have also been successfully building the next generation of systems analysts in China.