A Korean delegation visited IIASA on 17 July 2019 to know more about its current research agenda and to discuss opportunities for strengthening scientific cooperation between Korea and IIASA.

A Korean delegation, led by Myung-ja Kim, President of the Korean Federation of Science and Technology Societies (KOFST) and former Minister of Environment of the Republic of Korea, met with IIASA Director General and Chief Executive Officer Albert van Jaarsveld and with IIASA External Relations Department to learn more about the institute's research agenda and discuss current and future research collaborations with Korea.

Delegation also met with Korean researchers who are based at IIASA, including Korean participants of the IIASA Young Scientists Summer Program.

The visit was linked more broadly to the Europe-Korea Conference on Science and Technology 2019 which was taking place in Vienna on 15-19 July 2019. A number of IIASA researchers participate and contribute to the discussions of this conference. 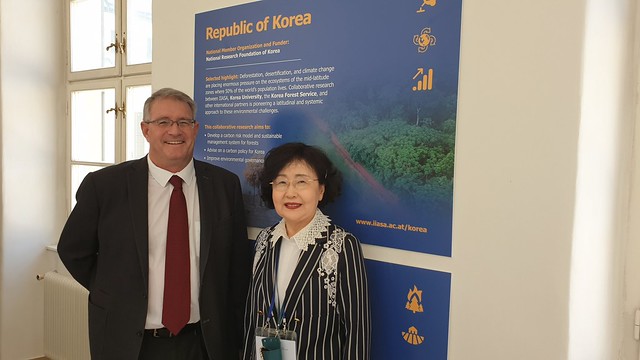 Since the Republic of Korea’s (Korea) membership of IIASA began in 2008, a range of research collaborations and capacity building activities have been developed by IIASA and it's Korean research partners.

Studies have explored green growth in Korea, global water challenges, and how to increase Korea’s resilience to extreme events among a range of other topics. Most of the research has also advanced Korean capacity to use and develop the tools of systems analysis such as building a Korean version of IIASA’s GAINS model that has helped governments across the globe to cut air pollution and greenhouse gas emissions in the most cost-effective manner.