IIASA Director General and CEO Professor Dr. Pavel Kabat participated in the Russian Union of Industrialists and Entrepreneurs (RSPP) congress, and the Russian Business Week, a key annual event of the RSPP. During his time in Moscow, Kabat attended a number of high-level meetings to further enhance research collaborations with Russia. He also gave a lecture at the Russian Presidential Academy of National Economy and Public Administration (RANEPA).

Kabat travelled to Moscow to participate in two key events by the RSPP.

On 15 March, Kabat attended the the Russian Business Week, a platform for constructive interaction between representatives of the government, business, and experts community. At this event, Kabat joined the high-level International Forum at 2pm to discuss "Integration in Greater Eurasia: Risks and Opportunities".

The aim of the forum was to debate existing and proposed trade agreements in Greater Eurasia. Kabat was joined by Alexander Shokhin, President, Russian Union of Industrialists and Entrepreneurs, Igor Morgulov, Deputy Minister of Foreign Affairs of the Russian Federation, and other leading experts in economy and policy in Russia.

Prior to the Russian Business Week and the RSPP congress, Kabat gave a lecture on 14 March at 10.30am at RANEPA on "Global transformation pathways. Value of systems science" and met with the Rector of the Academy Professor Vladimir A. Mau.

During his time in Moscow, Kabat further enhanced collaborative activities between Russia and IIASA by holding a number of high-level meetings with leading experts in government, academia and business, including: 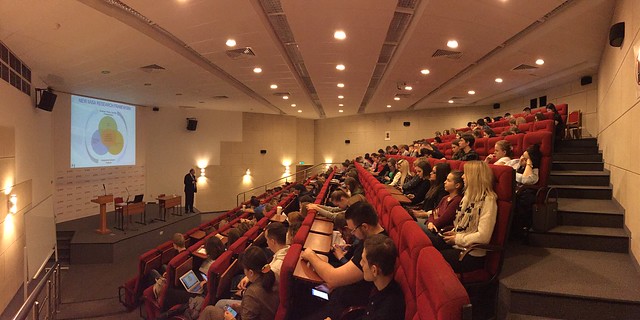 The Geophysical Center of the Russian Academy of Sciences

Tatyana Valovaya: "We need a professional and impartial panel discussion on the theme of cooperation EAEC - EU" (The Eurasian Economic Commission)

Lisbon to Vladivostok: How could deeper economic integration work?